I had never even heard of the place until I met my boyfriend for the first time. He’s from this small town that sits at the very top of Alaska, the very top of the United States, snuggled right up to the Arctic Ocean. The first couple years I visited this unique town, I only came up for a few days around the 4th of July. Now, I’ve stayed and worked in Barrow for the whole summer, the past two years.

The town itself is mostly made up of a bunch of houses on stilts, due to the unsettling ground, one grocery store, and a few other convenience stores,  one gas station with prices you wouldn’t even believe, an elementary, middle, and high school, and a ridiculous football field fit for a college team with a lake on one side and the Arctic Ocean on the other. There’s not a single paved road. There are like five or so restaurants and maybe 8 different taxi companies, I have no idea why. There’s lots of buildings falling apart and trash and broken down cars scattered about in people’s yards. In all honesty, looking at the town itself is somewhat less than desirable.

Then you broaden your gaze… One day there is ice along the ocean shore and as far out as you can see. The next day the ice can be completely gone, blown somewhere new by the wind, and you’re left with, depending on the day, a vast sparkly blue ocean or a gray expanse that eventually kisses the gray clouds out on the horizon. 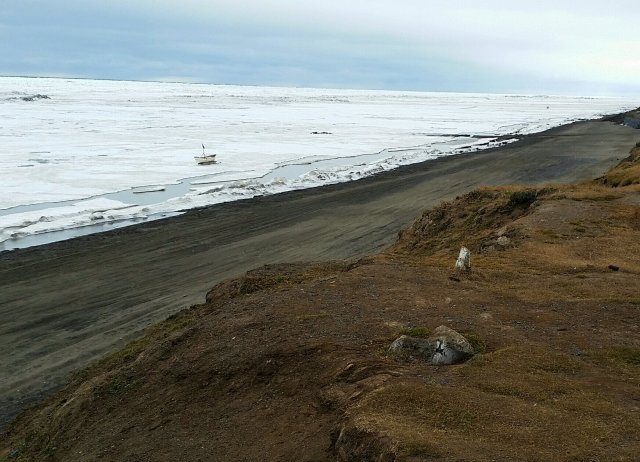 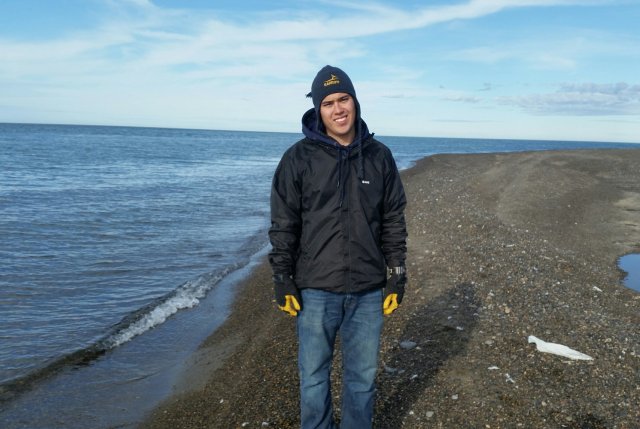 There’s no doubt about it. The ocean absolutely amazes me. Then you look in the other direction and it’s the strangest thing for your eyes to get used to. Unobstructed flat land for miles and miles… There’s no trees past a certain point in Alaska, the Arctic Circle, and the mountains stop around the same area. Not a single tree, building, hill, mountain in sight. Just flat, green land that stretches on forever and eventually meets with the clouds and blue sky. It’s truly breathtaking.

If you’re lucky, you might even catch word that there’s a polar bear near town and get to watch this powerful creature in its free and natural environment before the Wildlife Department scares it away.

It’s honestly strange when you leave Barrow and see trees and mountains again. They are GIANT and breathtaking in their own right. It’s so weird and exciting to experience that perspective change. Something I couldn’t have imagined. I love it.

Barrow can be a difficult place for me to get used to at times, and there are things about it that are not my favorite, but I’m so thankful for what I’ve seen and experienced there. I’m not sure if I ever plan on experiencing a winter, but summer on top of the world is like nothing I’ve seen before.
All the loves x I have thought about blogging for what feels like a very long time now. But I was put off from it for a few different reasons. For one, I feel like I have no idea what I’m doing. Also, I feel like everyone and their mother has a blog. So I find myself questioning, would I really have anything to offer that isn’t already out there? Even though I still think the answer to that question is no, I’ve decided to give it a try anyway.

I would prefer to say that I tried it and it turned out to not be my thing, rather than never having tried it at all, still questioning whether to give it a chance or not.

So here we go!

I think this will be fun, if for nothing else my own entertainment at least.

I guess I’ll introduce myself… My name is Jourdan. I’ve named this blog “Jourdan in Wonderland”, due not only to the fact that I enjoy the story of Alice in Wonderland, but also because I enjoy finding the quirky, strange, and beautiful details in my very own day to day life, in our own wonderous world. And usually follow that moment by snapping a pic with my phone and uploading it to my instagram (feel free to check it out, shameless plug haha). 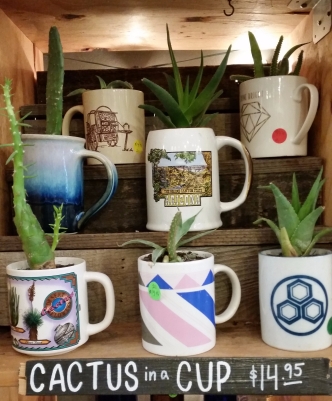 I’m trying to better my life by being less of a lazy potato and getting my brain and spirit active with some good ol’ fashion creative time. I consider myself a creative person even though I don’t necessarily excel at any art subject, though I happily enjoy multiple. I never used to like writing, but when I started college something changed and now I appreciate it, thus the blog being born! I really enjoy taking photos and want to master the manual mode on my camera.

I also really like to paint, read, edit videos (though I usually don’t have the courage to film any), and make jewelry. I plan to try new creative projects that I’ve thought a lot about, so those will probably be the blog posts in my near future!

With this quick post, I just want to say thank you for stopping by! And I hope my content brightens your day!

All the loves x

Where To Find Me